Breastfeeding came super easily to my baby and I while we were in the hospital, but by the time we got back home, things went downhill quickly. It seemed as though my body and baby were putting on a show for the lactation specialists, but the second they were gone, neither had any idea what to do.

Postpartum was hands-down the most difficult part of pregnancy for me. The hormones threw me through a loop that no one could have prepared me for. Breastfeeding was SO difficult and I cried my way through most feeding sessions out of frustration. I couldn’t understand how everything else had come so naturally to me, but I couldn’t perform the most natural way of feeding my son. I had to regularly supplement with formula the first week or give my son breast milk from a bottle that I had previously pumped.

(This post probably contains affiliate links, we earn a small commission, at no extra cost to you, if you purchase an item using our links! Thanks for your support.)

I remember going to my son’s two week pediatrician appointment and the doctor accused me of not feeding my son enough, because his weight gain was not significant. (Needless to say, we switched doctors shortly after for a hoard of reasons.)  I was crushed and furious, because at this point, I knew he was eating enough and I was trying so. damn. hard.

Later that day, I had an appointment with my midwife to check my cesarean incision and broke down crying when she asked how things were going. I explained through blubbering lips how terribly difficult breastfeeding was for us and how much stress it was causing.

I will never forget her kindness and gentleness when she responded, “Honey! You do not need the stress of breastfeeding if it isn’t working for you! Formula exists for a reason and you should have zero guilt about using it. Your son thinks you are the BEST thing in the world and doesn’t care how he is getting fed.”

She went on to tell me that it didn’t work for her either and she used formula for her babies. This shocked me, because I had assumed all midwives would push doing everything natural (shame on me for assuming!).

I left my appointment and it felt as though a weight had been lifted from my shoulders. I felt that I had been permitted to try a different route for feeding my son. I was not quite ready to resort to formula only, but decided to exclusively pump, EP.

Like I tend to do, I hopped on Youtube and ingested a world of content from different EP mamas and began my new journey. For the first week, I was on cloud nine not having to breastfeed and my son took the bottle so easily. But, the second week, I quickly realized that this was not going to work being tethered to a wall, alone, for hours a day.

I did some more Youtube research and decided to buy a totally portable and wearable breast pump. There are only a few options out there, but I landed on purchasing the Freemie due to its much lower price point.

The second I submitted my order, I started tracking my shipment every couple of hours, just counting down how many more pumping sessions I would need to do tethered to the wall. Two LONG days later, my pump arrived. I immediately ripped open the user guide, sanitized the system and went to work on using it.

My Freemie Liberty pump came everywhere with me! When I say everywhere, I mean EVERYWHERE. I wore that thing shopping, to friend’s houses, in the bathtub, in bed, while doing chores, while driving, while weed wacking, when grabbing the mail, when walking, etc. I wore my pump everywhere and didn’t care that it gave me insane cone boobs. It gave me the freedom I was so dreaming of. There was a slight learning curve to getting the right suction and finding the appropriate bra to fit the pump inside. But, I quickly was proficient in my use of the pump, and again, felt that a weight had been lifted from my shoulders.

I pumped on average 6x a day for 30 minutes each. While this came easier to me than breastfeeding, it still took its toll. I decided to wean off of pumping when my son was four months old, knowing I had a freezer stash that could get him to about six months old. My son turns six months old in three days from when I am writing this, and you know what? We finished his last bottle of breast milk two nights ago. It was bittersweet feeding him that last bottle, but I was also very proud of myself.

I feel like breastfeeding is a topic that gets brushed over often. I wasn’t prepared the frustrations I was going to have with it or the burden that it would cause me. I wasn’t prepared for the heavy waves of guilt that came with my body not cooperating and giving my son formula. I know so many moms and have seen so many moms that breastfeeding comes naturally to and some just love the experience while other float through it easily feeling neutral about it.

If I am blessed with a second child, I would invest in an even more mobile version of breast pump, like the Willow.  I loved my Freemie, but the tubing still would be a hindrance.  The Willow eliminates the tubing issue!  Don’t spend another minute tethered to the wall. Join the revolution today and pump wherever life takes you with Willow®. Shop now! 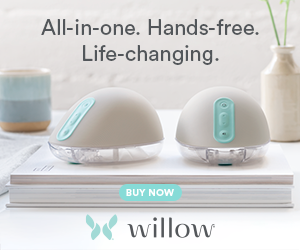 In the end, we all want what’s best for our babies and my efforts trying to exclusively pump ended up being what was best for me mentally. And I have learned that a happy mama makes for a happy baby. And I always have held my midwife’s words close to my heart when I start to feel guilty about the path we took, “Your son thinks you are the BEST thing in the world and doesn’t care how he is getting fed.”

Have you caught up on the latest?